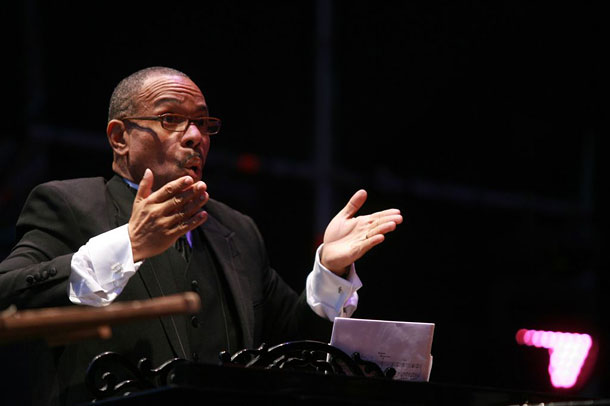 Dr. GREGORY HOPKINS Artistic Director Gregory Henry Hopkins is a native of Philadelphia, Pennsylvania. He received his bachelor’s degree in voice from Temple University, a master’s degree in opera from Curtis Institute of Music and doctoral degree in music from Belford University. He is the winner of top prizes in the Busseto Verdi Competition and the Mantova International Vocal Competition, both in Italy, the Dealy Award and the Opera Index Grant. Dr. Hopkins has sung the role of Othello with the Metropolitan Opera Education department. He has sung the Manzoni Requiem by Verdi with the Orchestras of Anchorage, Alaska; Chicago Illinois; Honolulu; Washington, DC; the New York Choral Society; and The Mendelssohn Club of Philadelphia. Performances of Beethoven’s Ninth Symphony have been performed with The Baltimore Symphony, the Symphony in Bogota, Colombia, and the New Haven Symphony. Professor Hopkins has sung Orff’s “Carmina Burana” with the Colorado Symphony and with The Alvin Ailey American Dance Theater where he also was a featured soloist in “Revelations”. For Eve Queler’s Opera Orchestra of New York, Professor Hopkins has sung “I Vespri Siciliani” and “La Battaglia di Legnano”, both by Verdi; “Il Pirata” (Bellini), “Joan of Arc” (Tchaikovsky) and “Robert le Diable” (Meyerbeer). With New York City Opera, Dr. Hopkins debuted in “Die Soldaten” (Zimmerman) with subsequent performances in “Turandot” (Puccini); “Dr. Faust”, (Busoni), and “The Mother of Three Sons” (Jenkins). Other Operatic performances include: “La Donna del Lago”(Rossini) with The Arizona Opera; “The Prodigal Son” and “Curlew River”, both by Britten, in Venice, Italy; and “Idomeneo” (Mozart) in Geneva, Switzerland; also “Nabucco” by Verdi with the Queens Choral Society and Opera Ebony. Additional performances with Opera Ebony and Opera North include: “Lo Schiavo” (Gomes),“Madame Butterfly” and “La Bohème” both by Puccini; and “La Traviata” and “Aida” both by Verdi. With the Five Colleges Orchestra, Professor Hopkins has performed: “Tosca” (Puccini) and Cavalleria Rusticana” (Mascagni) along with “The Barber of Seville” (Rossini) in Martinique. He has sung Undine Moore’s “Scenes in the Life of a Martyr”, with the Philadelphia Orchestra and the Baltimore Symphony. He has performed the title role in “The Ordering of Moses” with the National Symphony and “I Will Lift Up Mine Eyes”, by Hailstork, with the Atlanta Symphony, Philadelphia Orchestra, Berkshire Choral Festival, Baltimore Symphony, and Chattanooga Symphony. Additionally, Dr. Hopkins has performed, also by Hailstork, “Done Paid My Vow” with the Long Island Philharmonic, and the world premiere of “Deborah” (Schoenfield) with the Haifa Symphony in Israel and in the United States with the National Symphony in DC as part of the 50th Anniversary of Isreal. As artistic director of Harlem Lyric Opera Company, Dr. Hopkins has conducted all the performances of the company, which include all international performances of the Harlem Jubilee Singers, Harlem Opera Choir, Harlem Opera Ensemble and other groups affiliated with Harlem Lyric Opera Company as listed in the company’s web page. As a singer, pianist, organist, choral conductor, teacher and clinician, Dr. Hopkins has traveled throughout the Americas, Europe, Asia and The Middle East, with recent performances including The Cervantino Festival (Mexico), and festivals as Umbria Jazz (Italy), Jazz a Vienne (France) and JazzVitoria (Spain). Dr. Hopkins serves The National Convention of Gospel Choirs and Choruses as Director of Performance Ministries; The Hampton University Minister’s Conference as Recital Co-Coordinator; and Gospel Music Workshop of America as Vocal Consultant to the Men’s Department. He has been twice privileged to prepare and present musicals for the National Baptist Convention’ annual sessions, and was musical director for the NAACP’s Centennial Celebration. At Arkansas Baptist College’s EC Morris Institute he is Choral Clinician. For the Million Man March he was selected by Minister Farakahn to sing immediately following the address. As an educator, he has served on the faculties of: Community College of Philadelphia; Morgan State University; Westminster Choir College and NY Seminary of the East. Currently, he is Assistant Professor of Voice at Howard University in Washington. For nearly a quarter of a century he has been Minister of Music for Harlem’s Convent Avenue Baptist Church. He is also Artistic Director for Harlem Opera Theater and Music Director for the Harlem Jubilee Singers and Cocolo Japanese Choir. Dr. Hopkins is a featured artist on five recordings: “Blue Monday” (Gershwin) and “Lost in the Stars” (Kurt Weill), a recording of Spirituals entitled “Amazing Grace” which he conducted, “the Gospel at Carnegie Hall” and “Done Paid my Vow”.

A selection of past, recent and upcoming engagements
Excerpts from press reviews
"The magic of Gospel enchants la Rupe (the rock of Orvieto). The traditional appointment with the black voices excites and convinces." Il Messagero, Italy, January 2nd, 2012
"To close 5 days of music, yesterday evening, at Il Duomo (of Orvieto) the traditional Mass for Peace, was marked this year by the inspiring gospel songs of the Harlem Jubilee Singers, conducted by Gregory Hopkins, who three years ago performed in Orvieto an acclaimed presentation of Duke Ellington’s Sacred Concerts as part of the Umbria Jazz Festival." Corriere Dell’Umbria, Italy, January 2nd, 2012
"Moving African American sounds transcended at the Ruins of Huanchaca. The Harlem Opera Choir and the Symphony Orchestra of the University of Concepcion gave an unique and remarkable show. The Best Gospel in the world marveled Antofagasta. The Harlem Opera Choir made an impression by the vocal quality of its singers." El Mercurio, Antofagasta, Chile, November 10th, 2012
"Gregory Hopkins and The Harlem Jubilee Singers turned the event into a gala thru their display of talent, at the Plaza Alonso Vidal." El Imparcial, Hermosillo, Sonora, Mexico, May 26, 2012
"Gospel Music takes Iquique by storm. The Harlem Opera Choir delighted the local community." La Estrella de Iquique, Chile, November 12th, 2012
"EXTRAORDINARY VOICES. The choir from New York gave one of the best evening performances in the history of the festival." Expreso, Mexico, May 27th, 2012
"Harlem Opera: mesmerizing." Diario de Cuyo, September 10th, 2012
"Throughout the entire concert, each of the choir members turned into a soloist, with a voice of overwhelming virtuosity. “I had a chance to listen to them in Harlem, a week after Obama’s victory- recalls Jean-Paul Boutellier- it was fabulous. It is one of the finest American choirs these days." Jean-Luc Coppi, Le Dauphine Liberere, Vienne, July 29th, 2009
"I should better talk about this group of 16 members, not as much as a choir, but as a formidable ensemble of soloist voices, accompanied by bass, piano and drums, though there also performed a capella songs, as in the origins of their music tradition." P. Gutierrez, El Alfeizar, Guanajuato, Mexico, October 14th, 2008
"The San Martin Theater enjoyed a religious feast thru the fantastic accords of Gospel Music. The African American choir performed twice to full houses, and had a great impact." Juan Pablo Sanchez Noli, La Gaceta, Tucuman, 2005
"With Hopkins and his choir we enjoyed again the best of Gospel Music." Ricardo Salton, Ambito Financiero, Buenos Aires, 2003
"A mix choir from a church on Convent Avenue, Harlem (New York), made vibrate the Luna Park Stadium for three nights in a row. Their religious songs provoked indescribable emotions in the audiences." Jorge Aulicino, Clarin, Buenos Aires, 2001
"The San Martin Theater enjoyed a religious feast thru the fantastic accords of Gospel Music. The African American choir is awesome." Juan Sánchez, La Gaceta, Rosario, 2005
"Blue Monday” is well worth encountering when enacted by a cast and crew as good as those mustered here. Gregory Hopkins, Harlem Opera Theater’s artistic director, did an outstanding job of conducting widely dispersed performers, including a string quartet from the Harlem Chamber Players." Steve Smith, New York Times, June 19, 2013
READ FULL ARTICLES